The report below published by www.mrw.co.uk shows the full extent of the NHS budget spent on disposing of waste.  The spend has increased by around 20% since 2007 despite waste volumes falling to almost a quarter of the 2007 level.

The planned biomass facility at Cambridge indicates that there is a move towards seeing these waste streams as a fuel resource rather than simply a disposal cost liability.  The PyroPure concept is part of this trend which will see more waste being disposed of at source and contributing towards the site’s energy demands.

Insight: Is the NHS a good investment opportunity?

Probably the most bizarre story on the pages of MRW in recent times has been that of medical clinics in the vicinity of London’s Harley Street not properly disposing of hazardous waste - including pig snouts used for the training of clinical staff.

Hazardous waste is no laughing matter for the NHS, though. Most NHS waste is domestic, but clinical/hazardous waste is the most costly to dispose of, at five to 10 times more expensive than domestic waste.

This fact will become increasingly important as the NHS goes through a challenging financial period - and it is set to get worse. NHS England has warned of an anticipated funding gap in terms of productivity of £30bn by 2021.

At the same time as hospital trusts are struggling to balance their books, the costs of NHS waste disposal in England since 2004/5 have increased year-on-year, according to a MRW analysis of Department of Health figures. But the tonnage landfilled peaked in 2007/08 and then started to decrease every year until the most recent data point in 2011/12 (see graph below).

The volume of waste recycled by the NHS in England has increased by 18% overall. But data from the NHS Sustainable Develop-ment Unit (SDU) shows how there is a great variation in progress between regions (see map bottom).

The phenomenon of increasing disposal costs as the amount of waste has been falling in recent years could be explained by the rising landfill tax - at least in part. Around one in every 100 tonnes of domestic waste generated in the UK comes from the NHS, according to the SDU. The bulk of this goes to landfill.

Adrian Judge, waste and bioenergy managing director for the Green Investment Bank (GIB) told MRW: “Identifying cost savings is critical to the public sector, be that through reducing costs from energy efficiency, reducing waste through better education or by treating waste in a more cost-efficient manner.”

By education, he means identification of waste in the first place: “According to the precautionary principle, [waste] tends to go into the orange clinical waste incineration bag, when studies say some things would be safe to put into the yellow and black tiger-striped [offensive waste] bag or even to commercial waste.”

The SDU recognises that future resource pressures mean that monitoring waste disposal will be crucial. The NHS also has a commitment to reduce its carbon footprint by 50% by 2025.

A renewed focus on waste and recycling in the NHS also represents an opportunity for the resources management industry, and carbon emission cuts go hand in hand with this.

Earlier this year, the GIB announced it would plough £18m into a biomass facility for Cambridge University Hospitals NHS Foundation Trust, the bank’s first investment in the NHS

The GIB is backing a combined heat and power (CHP) unit, biomass boiler and dual-fuel boilers for heat recovery from medical incineration for the trust’s Addenbrooke’s and Rosie Hospitals. The bank said the Mitie-run facility would save the trust more than £20m in energy costs during the 25-year life of the project.

“A hospital is ideal because its long-term energy needs are more dependable than a commercial business, which might relocate or cease to trade.”

At the time, business secretary Vince Cable said: “The size of the NHS estate means there will be huge opportunities to invest further in building energy centres like the one planned for Cambridge.”

The GIB has told MRW it is considering making further investments in other NHS trusts, but it is too early to say what they are.

Judge added: “The GIB is keen to invest in projects which are both green and commercial.

“An infrastructure investment project with a public sector client which results in the diversion of waste from landfill - such as through different treatment of a range of medical wastes, generation of additional renewable energy, for example at Addenbrooke’s, or reduced energy consumption - has the potential to be an attractive investment proposition.”

Alon Laniado, investment director at specialist waste sector investor Eternity Capital, told MRW that the company is currently considering biomass facilities for a range of waste streams. He sees the NHS as an attractive opportunity to have a dedicated supply contract for feedstock with a large organisation.

“While we have not yet looked into the details of medical waste, we are not ruling it out.

“The key will be, as per other waste applications, to ensure the technology can work effectively for the waste stream, especially as medical waste is quite specialised - including being adaptable in case of changing waste streams.”

Paul Levett, an industry non-executive director who is also on Eternity’s advisory board, said: “An investable biomass-to-energy project needs clarity with regards to eligibility for Renewable Obligation Certificates (ROCs) or Contracts for Difference (CfD).”

These are both renewables subsidies. CfDs will take over from ROCs in 2017 under the Department for Energy and Climate Change’s plans.

Levett said: “The project can be enhanced if there is an on-site user for waste heat or CHP. A hospital is ideal because its long-term energy needs are more dependable than a commercial business, which might relocate or cease to trade.”

He added that engineering, procurement and construction ‘wrap’ contracts and/or meaningful performance warranties will also allow these kinds of developments to go ahead. Wrap contracts are where projects with more than one contractor use a ‘wraparound guarantee’, which guarantees the obligations of both.

Another indication of the potential for the NHS to improve its waste manage-ment was the announcement in September of a joint venture clinical waste business between Sita UK and Tradebe to handle clinical/hazardous and domestic waste.

Tradebe said the business will be one of only two clinical waste companies in the UK to be able to offer both disposal options.

The NHS appears to be emerging as a promising prospect for the development of waste infrastructure and services. There is the desire within NHS trusts to cut the cost of waste and CO2 emissions, hospitals need energy stability in the long-term and, importantly, they provide a steady source of feedstock. 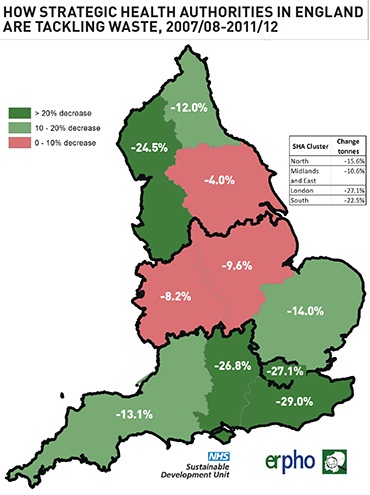