The worldwide ban on imported plastic by China will have a huge impact on British plastic recycling but with the government seemingly half asleep on the matter, who knows what the future holds for plastic. Environment Secretary, Michael Gove sums up the government’s position perfectly… “I don’t know what impact it will have. It is… something to which—I will be completely honest—I have not given sufficient thought.”

Britain has sent two thirds of its waste plastic to China since 2012. China announced this was to end (along with imports from the rest of the world) on 1st January 2018. With China seemingly tired of receiving contaminated plastic, the plug has been pulled.

Alternative markets for this waste aren’t clear at present, though there are murmurings more plastic could be sent to Asian markets, particularly India (May 2018 update - just under one third of the plastic that would have been sent to China, has found new global destinations). Early signs are that British businesses will need to heavily concentrate on plastic segregation. If we carry on as we are, other countries are not going to accept our plastic either.

With backward steps like landfill and incineration being seriously considered (May 2018 update - this is now happening!), British businesses need to help themselves to help Britain’s plastic recycling get back on track. Segregating will be crucial and it can be done very simply. QCR, have a very easy and cost effective solution to the problem with plastic bag stands. These bag stands can be located close to the source of plastic and are small, clean and easy to use. Clear plastics can enter one set of bag stands and coloured plastics in another.

Manufacturer, Lyte Ladders & Towers based in Swansea has this system perfectly in place. Colour coded plastic bag stands are situated in areas where waste plastic is prominent. Plastics are then segregated and when the bags are full, they are placed in a QCR V50 mill size baler ready for baling. A local recycler collects all completed mill size bales and pays Lyte around £1,000 for plastic rebates per year. 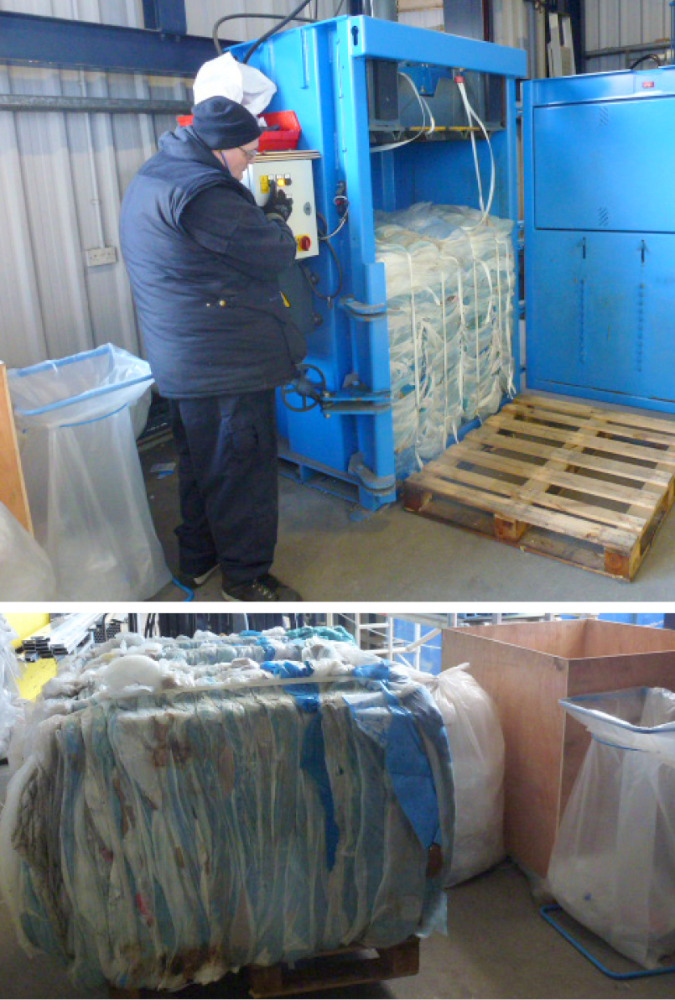 Lyte’s plastic recycling system is a leading example of how businesses can help themselves and Britain with recycling. The key to helping themselves is not using any dry mixed recycling bins. DMR bins will come under serious scrutiny in the near future following China’s announcement. Businesses that are not segregating and baling will often be throwing all plastics into DMR bins and not giving a thought to what type of plastic it is. This will result in the waste management company having to segregate once the plastic arrives at its depot and this will certainly mean an increase in bin collection prices. Even if you decide to start splitting plastics into different bins, this will only cost you an extra bin.

We think it’s paramount that businesses start looking into plastic bag stands and balers. They are an easy way to segregate plastic and will prove hugely cost effective in the coming months and years. DMR bins were outdated sources of recyclable waste disposal before this announcement but they will be yesterday’s news more than ever once the ramifications of China’s announcement become clearer for Britain.

Get in touch for friendly advice and to book your free site survey and trial today.